For reference purposes, I wanted to post up a list of formats available for play. I'll link it to the side panel and maintain as necessary.

Golden Age:
- All sets are legal in Golden Age. Banned cards may not be played.

Alter Ego
Instead of playing with the standard 50 endurance, players will be given an Alter Ego card at random at the beginning of each round.

Bring Your Own Set:
All cards in your deck must be in the same set. In other words, all cards in your deck must have been printed with the same three-letter set code. The actual cards you put in your deck don’t need to share a set code, however. For example, you can play a Flying Kick from a set other than Marvel Origins if you are playing a Marvel Origins deck. For this format, starter decks are not considered to be part of the base sets, but you can play a deck consisting entirely of cards from a given starter or the Hellboy Essential Collection set.

Bring Your Own Team:
This format is a Golden Age constructed deck format with further restrictions on deckbuilding. The player must nominate a team and all cards in the deck must be refer to that team. This means “generic” cards (that mention no team at all) like Mobilize or Savage Beatdown cannot be used.

Bring Your Own Two Teams:
This format requires the player to nominate two teams which are then automatically crossed over (no need for team-ups). All cards in the deck must refer to one or both of those teams. No generic cards are allowed. Any “age” can be used.

Build a Legend:
You must choose a character name and include at least 12 cards: with that exact name; and/or that refer to a character card with that name in their game text.

Countdown:
Players start the game by placing the top 7 cards of their deck face down in their resource row. These cards can not be looked at. Players draw their opening hand, choosing to mulligan or not. After the first draw phase players may look at their resource rows. Rather than adding resources each turn, at the end of turn each player KOs a card from his resource row.

Dual Legend:
Follows the Build-a-Legend format, but you must include two characters each with 12 cards referencing that name.

Special Guest Star:
Players may choose a single character card (up to four copies) to add to their deck. This card gains an affiliation of their choice in all zones for the duration of the game.

Super Crossover Sealed:
Modification of the Sealed Pack format when using packs from various different sets simultaneously. There are a couple of rules that need to be followed for this unique format:
1.Affiliated characters and character cards have all affiliations.
2.Cards that count affiliations, like Ethan Edwards count the number of printed affiliations instead.

Switch Deck:
Each player brings a constructed deck (in the specified event format) but does not play the tournament with it. Each round players will be given a random deck to play from the pool. Time permitting, the player with the most wins faces off against the player who built the deck with the most wins to determine a top place winner.
Posted by Obsidian3D at 12:08 PM No comments:

Hm...that title is better than the first one I almost went with, but on second thought, not by much! What I meant by that is that it seems most of the trading card games I like playing, or have been recommended, seem to die.

With VS System in our area, the resurrection came through my refusal to let a good gaming group die. We still have weekly tournies with a decent turn out, prizes and good times for all. I hope this will continue for a good long time.

Call of Cthulhu died as a TCG and was brought back as a living card game by Fantasy Flight. I ran a weekly league for about six months, but attendance was a problem. I still love the game and we do get to play occassionally. Seems everyone I introduced the game to enjoyed it as well, and we'd all like to play it more often.

The GIJoe TCG, well, it just died, but I still bring it back to life a few times a year at home or the local game shop. Good mindless fun with beloved characters from the 80s.

Warhammer: Invasion, is still going strong but I haven't played much since the fourth pack came out for the initial expansion story. As much as I love the innovative design of this game, I just can't support it with good conscience anymore. The power curve was way too much, way too fast. It's a shame really because the artwork is absolutely gorgeous and I really think the game plays well.

All of this rambling brings me finally to Warlord: Saga of the Storm. This game was recommended to me late last year, at which point I had never heard of it. Apparently it started out in 2001 as a collectable game and ran until mid 2008. After that it too was resurrected in a sort of living card game format. 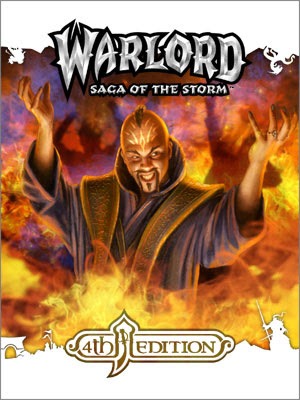 I've yet to play a game with the cards currently being produced (as 4th Edition, or 4e), but I certainly intend to! After purchasing a set of Epic Edition starters and finally getting to play some games with those, I have to say I'm hooked. The game play is very fast, has good depth and variety between factions, and the element of luck to it in the d20 rolls keeps things really interesting.

As of September 2010 there will be a total of 21 Adventure Path decks (55 cards) available for Warlord 4e. I'm hoping to order some up in the next month or two and try to haul some friends into the mix. If I'm not able to, I'll still have some new card artwork to enjoy.
Posted by Obsidian3D at 11:29 AM No comments: 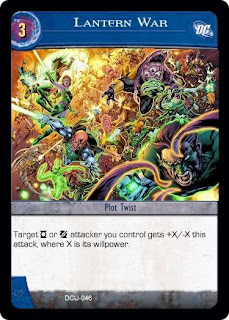 Last Friday was a great event. We had eight players some out for our DCU tournament. We were missing a regular player as well, which was too bad but it was still great to see so many people come out for the games.

We all built sealed decks using mock-packs from DCU. I had a ton of locations, but was pretty light on plot twists. Given that...I decided to play a mixed deck of Green Lantern, Anti-Matter and a few JSA characters thrown in for good measure. My mock-packs only had one team-up card (Janus Contract?), which was good for a three-way team up...but if you didn't choose Suicide Squad it got replaced at the end of the turn.

My first game ended in a coin-toss as Jason arrived too late to play (technically we should have given me a bye and he a loss for being late), but since we're pretty informal I just decided to flip a coin. The second game against Nathan was a tight race, with the health gains from my early Central Power Battery nearly being the difference. In the end it was Nathan's game by only 2 endurance! Round three paired me against Jordan, who apparently was not having much good luck for the evening, as I handed him his third straight loss.

Our top place winner was Jason, followed by Roy who narrowly lost the game against Jason. From I heard, Jason's copy of Amon Sur was the difference maker in that game. Everyone took home a ton of prize cards and I especially had a great time. It's always good to see so many people out for a night of VS!

Edit: Looking back through my selection of cards, I have NO idea why I didn't play an Anti-Matter deck. I had a very solid curve of 1 thru 6. The small number of Suicide Squad characters I had available fit into the drops very well, and my team up would have then worked too! Ah well...maybe next time.
Posted by Obsidian3D at 12:46 PM No comments: