On the outside looking in

From there we trekked a little further through the neighborhood， hopping a train briefly to end up outside Tianamen Square。 We didn‘t spend a lot of time there due to the extremely cold wind， which made the wide open space there less than appealing。 Instead we chose to venture into the Forbidden City。 Thankfully, it is no longer a punishable offense to enter (according to my book here, people who entered uninvited were decapitated as a way of deterrence...Yikes!) This place was pretty amazing, and I did manage to take some pretty good pictures. We were also blessed with an absolutely clear azure sky, which stood out in a striking contrast with the stonework of the city. Sadly, the wind was cold enough that we probably didn't spend as long there as we should have.

Ｓａｔｕｒｄａｙ ａｌｓｏ ｈａｐｐｅｎｅｄ ｔｏ ｂｅ Ｄａｎｎｙ＇ｓ ｆａｔｈｅｒ＇ｓ ｂｉｒｔｈｄａｙ， ｗｈｉｃｈ Ｉdidn't realize until we arrived back at their place. I had thought it was Sunday, and wanted to buy him a gift, but sadly was unable to do so. Danny's mom is a pretty good cook. She whipped up a full meal in just short of a half an hour. Danny did at least have the foresight to go around the corner and pick up a cake to help celebrate. It was very cool to see a simple family meal. It's one of the things that I've always enjoyed about traveling to other places.

Dinner was full of conversation and laughter, and Danny did her best to translate what she could for me while still enjoying dinner herself. Of course I missed out on a lot because there was just too much chatter with that number of people all talking and joking around a family table like that. It was a very enjoyable meal though, and the array of things they had to eat was very impressive. After the meal some of the family sat down to play Mah-jong, and the rest either sat chatting over a drink or watching the hours-long gala that was on TV to count down the new year.

I have to admit though, that I have felt more out of place here than any other country I have traveled to or lived in before. Mandarin Chinese is an extremely difficult language to speak. The intonation is killer, and my vocabulary is tiny. Having to rely so much on Danny is a little frustrating for me. I can read some of the characters, but not the meaning or say them out loud. Even during a time like Spring Festival, I am very surprised by the small number of non-Chinese here. There were far more foreign people in Japan and Korea I think, than here.

Tomorrow we're going on a tour, rather than having Danny do more driving. We have to be up early to head out of the city to see the Great Wall. I hope that it will be fun, and maybe can reduce my fish-out-of-water feelings too. Being on the tour might help a little. If I have a chance I'll write more before I come back.
Posted by Obsidian3D at 2:23 AM 3 comments:

Well I'm heading off to China in a few hours to take in the Chinese New Year in authentic style, but that doesn't mean I'm going to leave you all without a few final thoughts. Did you really think you were going to get off that easy?

Last Friday for our Golden Age Open tourney we had another very solid turn out of 10 players. Green Lanterns, two Exiles, Hellboy, Weapon X, Marauders, Purifiers and more were just a few of the decks we had hit the tables. After four rounds of play my Purifiers build only went 2-2, but I had good fun playing it and came up with an idea to tighten it up a little bit. I pulled out a turn 8 win against Exiles too, so I was more than pleased with that.

The big winner of the night was, once again, Will! I believe that makes him a whopping 12-0, as he's won three tournaments, all with flawless, no-loss records. So my parting challenge to you, my beloved Vs. Systemites...is to turn your attention to the quiet, friendly fellow who seems to win a lot. Pick his brain, ask him for strategies, milk him for deck ideas, partake of his knowledge...and then kick his butt with it! In a fun and friendly way, not a make-him-cry-and-never-want-play-again sort of way.

If I come back in February and find that someone was able to break Will's flawless record, I'll try to dig up a nice prize for you. Pile on!

I have a love-hate relationship with this show. It's gone on long enough that I think Clark should have long ago learned to fly and at least started thinking about the costume. When season 8 started and I saw the guy they'd cast as Doomsday, my heart sank even farther than it had during the extremely weak finale for season 7.

Over the past month I hadn't been able to catch the show, so it was pure luck that I was sitting at home and flipped the TV on just in time to see a guy with an axe materialize in Clark's barn. I sat bolt upright in my chair and said, "Holy crap is that The Persuader?!" Not fifteen seconds later, three members of the Legion showed up. The f-ing LEGION, and they looked just like they should! 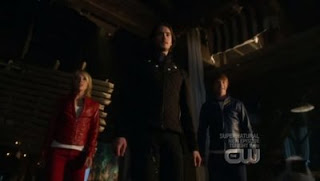 I won't ruin the rest of the episode if you haven't seen it yet, but this has got to be one of the coolest things I've seen in a television series in a very long time. I think Space is still running Smallville on Saturday evenings, so you might be able to catch it if you missed it last night.
Posted by Obsidian3D at 9:43 AM No comments:

I dig the Marauders!

After having some time to play with a lot of the cards from Marvel Evolutions I have decided that I enjoy playing the Marauders quite a lot. My deck originally started out as a build for one of our Random Punks events shortly before Christmas. I liked it well enough that I didn't take it apart right away, and even tried to make it a little better.

My current build doesn't include any rare cards for the three Marauder legends: Gambit, Mr. Sinister and Mystique. In fact, I don't even have Gambit in my deck at all. I just don't think any of his character or support cards are good enough to warrant adding my one or two copies of them in. My deck is actually pretty simply and runs well enough for me to enjoy playing it even when it loses...because they're almost always close games.

The deck seems to hit curve quite well in the early game, provided I draw or mulligan for a 1 or 2 cost character. I like the fact that the deck rewards me for stunning an opponent's characters. This game is all about combat in my opinion, so it's nice to have rewards for being successful at that.

If I were to make any changes, I think I would remove the Arctic Base, because I don't find that it is all that useful. Perhaps another 2 copies of a different 1 or two drop character could help me hit my early drops. Exodus is also an unused card, so dropping him for another low drop would likely be a good idea. Vertigo is absolutely awesome if you can keep her out for a few defensive turns, so try to protect her as best you can...at least until you can get Joanna out on turn five!

The other change would be dropping Random for two more copies of Sabretooth. I find that if I have Random in my hand, I very rarely want to actually recruit him. Harpoon is much better in terms of his ability, and Sabretooth is even better yet! 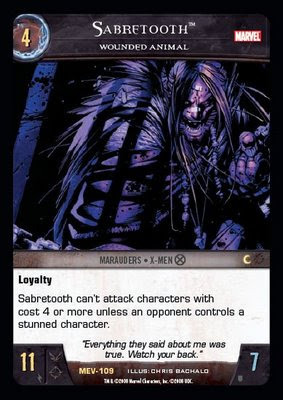 The deck is consistent because it has good attack pumps, some reinforcement, a little search and characters with good effects. I'd recommend playing a Marauders build to anyone who wants a fun, straight-forward combat deck.
Posted by Obsidian3D at 12:33 AM 1 comment:

I hope that everyone had a good holiday season and partied it up on New Year's Eve. 2008 was a great year for me on a lot of fronts. I found a great new job that I enjoy going to, made a lot of new friends and renewed several old friendships, became an uncle, and am very thankful for all of it. VS has been a big part of that year, not only keeping me busy on many evenings and weekends, but also being a gateway into making a lot of new friends.

The first event of the year at Trilogy was another Build-a-Legend event. We had 7 players in total, with one being a newcomer to the group. He brought along two others who bought some cards and watched, but weren't quiet ready to take the plunge into a full-on tourney. Of our seven players I believe we had legend decks for Spider-Man, Deadpool, Jean Grey, Darkseid, Cyclops and Multiple Man. I know there were two others, but what they were has totally slipped my mind. My apologies to both of those players.

After four rounds of play Will's Jean Grey legend deck came out on top. Congratulation to Will for winning the second of his two attended tournaments! That's a record that will be tough to beat. If he goes three for three I might have to make him retire or something! :)

As for my Multiple Men...I'm sad to say that it effectively sucks. I did alright in my first game, but it failed me miserably in the following two games I played. I decided to give it one more chance this afternoon just to see if it was a bad luck night, or my deck. While it varies slightly from the build I posted last month. It needs some more card draw, which could be solved by a couple copies of Birthing Chamber. I think I'll give it an upgrade and one more chance to prove itself. If I'm still unhappy with its performance I'm going to have to take it apart.

Next up I will do a quick run-through of my Marauders build and perhaps touch a little bit on X-Force.

Bring on another year of gaming!
Posted by Obsidian3D at 8:42 PM 1 comment: