Update: What the Hell Have I Been Doing Lately

I realized the other day that I have posted very little over the past year or even more. Why? Well the short answer is that my life has changed a lot in the last 2+ years. I've moved cities, am studying for a complete career change after 20 years, and have put a lot of time, money and focus into growing my business o2media.

I won't bore the few of you who read this with the details. They're not that exciting. What I did want to share was that my company has been developing some gaming figures of our own. A few weeks ago I announced a license agreement with Xion Studios, which lets us play in their amazing "WatchGuard" universe. I'm  really excited to showcase our first two figure sculpts: The Scintillating Spider-Squirrel and his partner, Trash Panda! 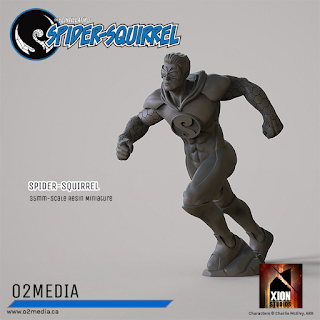 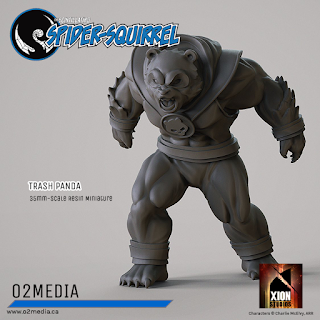 These 35-mm scale figures will be cast in resin and each model will include a profile card for use in the superhero skirmish game "Super Mission Force," by Four-Color Studios. Thanks to Scott for granting us permission to use his rules.

The first two figures will be available for sale in Q4 2018, with hopefully many more to follow soon after. I'd love to hear your opinions on which characters you like, ideas for the character cards or really just anything you want to comment on!
Posted by Obsidian3D at 2:39 PM