I built TONS of models during August and September, and even applied some paint to a few figures. Most of them are Heroclix repaints / rebases, but there are a few actual paint jobs in the lot.

First up is a little-known board game that I picked up on discount years ago. Herocard: Champion of New Olympia. It came with two figures, and the other two were single character expansions. The figures were a sticky plastic with low detail, but I rebased them and repainted them anyway. The game is actually pretty fun. 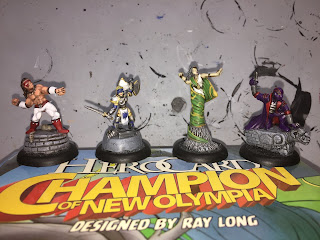 Next up, for some reason I got on a roll doing Fantastic Four stuff. I'm not a huge fan of the team, but I had a great Thing figure built and primed from Knight Models, so I decided that he needed his pals. The other three figures are just rebased & touched up Heroclix from the "Fantastic Forces" set. 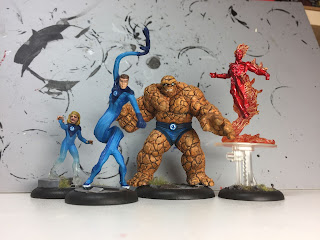 I've always been a sucker for She-Hulk, so when I found a She-Hulk figure I set her aside. I've already painted a version of her, but I knew she'd been a member of the FF at some point. I also added an invisible version of Sue (no paint required), Silver Surfer and Namor. Other than Sue, these three figures were completely repainted. I didn't bother stripping them first, I just painted over top. In the midst of all this madness, I remembered a short arc I had read back in the 90s where the original FF was supposedly killed off and had to be replaced by a whole new team. I dug through the bins and found figures for that too. Ghost Rider and Hulk were full repaints, Spidey and Wolverine are just touchups with washes and highlights applied. 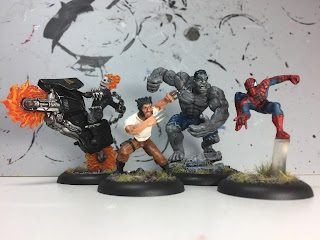 Finally, I'd had a few other Hulk-related characters set aside for a while and decided to get them finished off as well. These two were easy, done the same way as Wolverine. Slight touchups, a wash and some highlights over top. 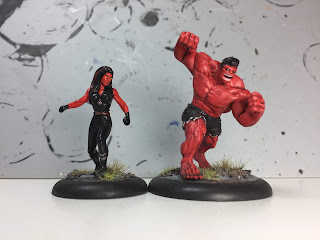 It's nice to get some stuff through the paint queue, even if they're mostly just repainted models. I think they turned out nicely and I had a good time getting them finished.
Posted by Obsidian3D at 5:17 PM

They all look great mate!