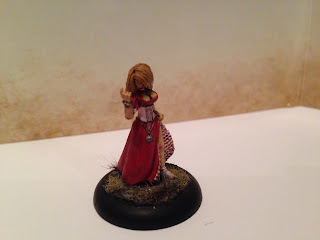 All of these figures are from the first Bones Kickstarter campaign from Reaper Miniatures. First up is one of the fantasy civilians. I've actually had this one painted for a few months, but she languished on the prep table awaiting enough other completed figures for me to do a batch of basing and static grass. 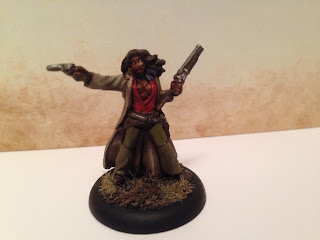 More recently, after having done two batches of police I wanted to paint some single figures. So I decided to add some more folks to my western gaming collection. One of the two western figures from the campaign looked a lot like Zoe from Firefly, so that's how I painted her. I tried using more natural colours and think she turned out great. 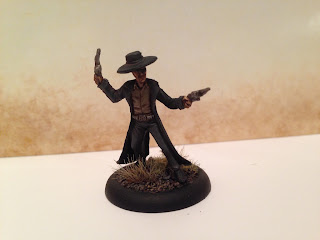 The other one looks quite obviously looks like Lee van Cleef. He was a really easy paint job and looks exactly as I'd planned. Unfortunately it wasn't until I'd primed him that I noticed the one pistol being bent. I tried the hot water trick after I finished painting, but it seems that the paint adds just enough rigidity that I can't reposition it. In the long run I don't really care. 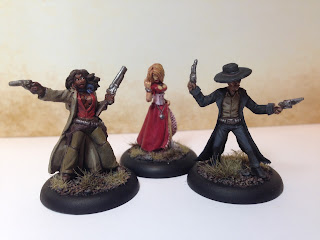 The do look great together don't they? I have to confess that I find the Bones figures to be very easy to paint. I imagine that's more due to the quality of the sculpting than the material. Doing these in metal would have been just as simple I'd wager. I'll be writing up some profiles for them so I can use them in Blackwater Gulch or Legends of the Old West.

Nice work on those, especially the ladies. :)

Thanks. I'm quite pleased with all of them really. I certainly don't subscribe to the cries that the Bones figures aren't good. Sure the material is different than plastic, resin or metal, but the quality + price equation works out for me.