Years back I bought a good number of SuperFigs from one of my local shops. They're a little bit dated looking, but I have to say that every time I paint one of them I enjoy the experience. The detail on them is nicely exaggerated; they really do evoke a comic book feel. I'll likely be picking up some more soon if I can find them.

One downside to working with SuperFigs is that they are all cast with very large integrated metal bases. Every one I've bought has been too big to fit on a standard 30mm base. If base size is important to you, clipping and cleanup will have to be done in order to integrate them into your collection. It's worth the effort in my opinion.

My favourite figure from the line is still Krieghunde, which I painted long ago and have used in several games with different rule sets. According to the SuperSystem rules available for the figures, he is a member of a team called the "Larcenous Legion." I picked up a few other figures who are also part of that team. 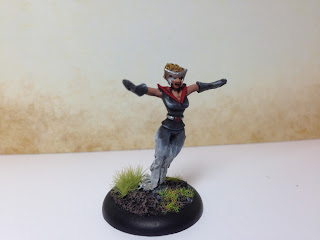 First up is "The Wisp"; it's not a very inspired character name, but the pose is decent, despite the blocky hands and a rather mannish face. The paint work on the legs turning to mist looks better than I'd expected, despite it being some simple washes and dry brushing. 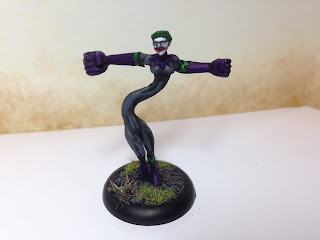 Another on-the-nose named character: Elasti-Woman. Essentially a female version of the Joker with elasticity / stretching powers. The studio paint scheme I found for her really didn't work in my opinion. Knowing that I have a huge crew of Joker miniatures to paint for the Batman Miniature Game in the near future, she was a great experiment. Despite the figure being only so-so, I think the paint work I did really makes her interesting to look at. 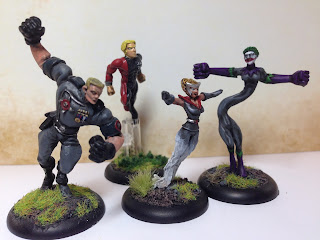 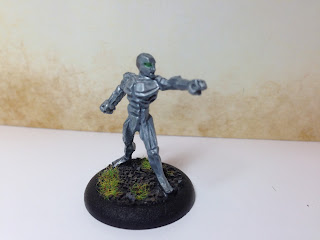 Emerald Alien didn't actually end up being painted green. Back when I was working on the last set of objectives for BMG I mixed up a really nice pearlescent colour. This figure was on the workbench next to me and I had enough paint to use on him. Extremely simple to add the green eyes and call him finished. 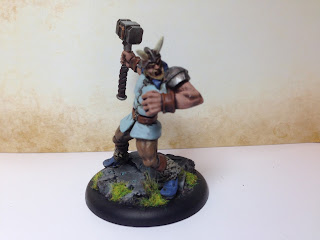 Perun is an absolute GIANT of a figure, quite literally. When I bought him I wasn't terribly impressed with the sculpt. When I dug through my bases to find something for him and got him mounted, it really started to come together. The shading and colours I picked are really pleasing to me and I'd be proud to put this guy on anyone's table for a game. 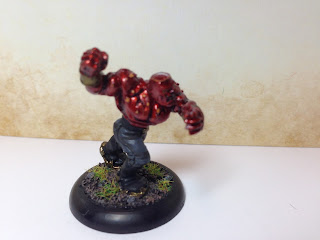 This shiny paint scheme was actually an experiment. I recently played and finished Arkham Knight on PS4. One of the selectable skins is a Batman 3000 red and black outfit. I think it looks really striking and plan on doing something like it with my Arkham Origins Batman figure. Kragg seemed like a good choice to try it out on, and I'm very happy with it. 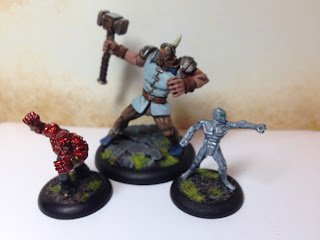 All these figures make me want to play a game, so I'm going to dig up my SuperSystem 3rd edition and get a bunch of these on the table really soon!
Posted by Obsidian3D at 12:07 PM

Very nice work on those. I used to have a collection of Superfigs and at the time they were painted, I enjoyed the minis. :)

Perhaps I'm just a hoarder, but once I've painted something it generally doesn't leave my collection. I have given the odd figure away as a gift, but that's it.

Thanks for the comments!